Bellefield is a leading innovator in Legal Mobile Technologies and Enterprise Solutions,
bridging the gap between your enterprise software, mobile devices, and desktop applications.

The Apple Watch Is Much More Than What You Think

Watch Out: The Apple Watch is About To Change Mobility As We Know it...Are You Ready?

Last week I was talking with a client about our upcoming release of the  iTimeKeep App for the Apple Watch, and his reaction was very interesting. His perspective, that the Apple Watch is a solution looking for a problem, is not unusual. Many also thought the same about Twitter (140 characters, are you kidding me?!), the iPad and even the iPhone itself.

If you’ve been following the Apple Watch since its release a few months ago, here are some things you might have heard:

After reading the above bullet points, you might be surprised to know that the focus of this blog post is to argue that the Apple Watch (and its competitors in the wearables market) represent the future of mobility.

With all of the hype surrounding the launch of the Apple Watch, followed by “sales are not looking so hot,” why are we still in camp “gamechanger?”

Let’s take a trip back to product marketing 101: Roger’s Bell Curve. For those of you that aren’t familiar with the technology adoption lifecycle, it works like this:

You can learn more by reading this article on Wikipedia, but the idea is that there are several phases of new technology adoption, each phase is comprised of groups of people that share characteristics and behaviors that define their approach to technology.

Right now, the Apple Watch is in the early adopter phase, which according to Roger’s model is defined by “younger, more educated, tend to be community leaders, less prosperous.” In other words: trendsetter. Early adopters are very important to companies, and they often highlight any product bugs or improvements needed to drive widespread adoption. They also provide the early revenue needed to justify continued innovation of the product.

So, who are the early adopters of the Apple Watch  and what are they saying?

According to a survey by Wristly, which was featured in Fortune, the early adopters of the Apple Watch are comprised mostly of “Keen Users (53% )” and “Tech Insiders (34%).” The remaining early adopters are, not surprisingly, app developers (9%) and members of the media (4%).

What’s the sentiment of the early user base? To put it simply, they love it. According to the Wristly survey, 97% of Apple Watch users are somewhat or more satisfied, and 66% are “very satisfied.”

What the Apple Watch Means to the Legal Industry

You’ve noticed us talking about mobility once or twice (maybe three times), right?

Mobility has changed the industry, aligning with the way that attorneys work in order to promote productivity anywhere, at any time, via any device. Mobility is continuing to evolve, and the future lies in wearables and artificial intelligence (particularly in the area of voice-activated software).

In general, Business Insider predicts that the wearables market will experience a growth rate of 35% over the next five years, compounded annually. It only makes sense that attorneys, who spend more time away than at their desks, will embrace wearable technology to practice True Mobility.

In the world we live today, about 70% of our tasks are short, in-and-out tasks. With the rise of the Apple Watch, activities such as timekeeping, dictation and workload management will be achieved at a flick of the wrist.

Over the last couple of years smartphones have increased in size. Often referred to as “phablets,” and they made up 21% of US smartphones in Q1, with the iPhone 6 plus leading the way. Why do our smartphones keep getting bigger? The reason is unlikely to surprise you. Smartphones are turning into our primary computers (and even televisions) so a bigger screen serves many of the functions we demand.

All of these added benefits don’t come without challenges: how do I fit it in my pocket, I cannot find it, it’s too big to carry with me all the time. In April of 2013, the Vice President of Dockers clothing stated that they had noticed the trend in larger phones and have begun to resize their pants pockets “to accommodate the growing size of smartphones.” We are trading off functionality for convenience.

As the mix of devices continue to evolve, wearables, specially the Apple Watch, will redefine the convenience of our mobile lives, to the point that we won’t be able to imagine life without it. The fact you can get instant notifications, prioritize which emails are critical, send an immediate text, make a quick call, see your next appointment, get news alerts, make payments, get directions, record time, all these right from your wrist, not only allow us to focus on the tasks that really matter, but also be more productive.

Female attorneys, in particular, will win big with the Apple Watch. 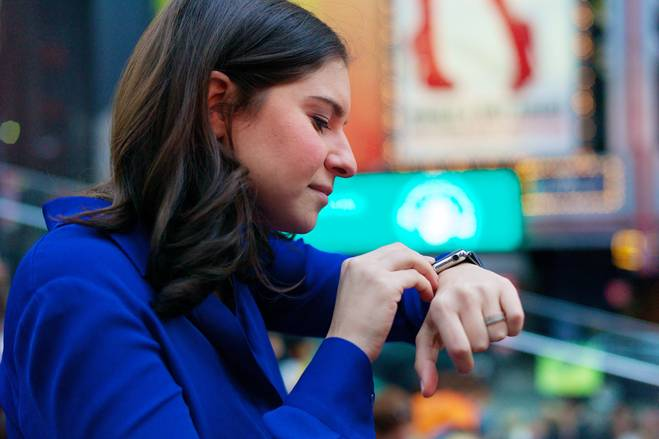 As it so happens, women have reported a higher level of user satisfaction with the Apple Watch than their male counterparts. Why is this? It’s simple: women need it more.

For men, mobile devices are typically more accessible at a moment’s notice than for women, whose phones are often buried at the bottom of a crowded handbag. It is easy to dismiss this, but if you are a woman, you are likely to know the frustration that occurs in these small moments. The Apple Watch offers a simple level of convenience that is less familiar to women than to men. For female attorneys and executives looking to maximize productivity in the midst of competing daily demands, this technology will be transformative. I know that it has been for me.

Ultimately, whether or not the Apple Watch becomes a success or not is still unknown. However, you know our opinion on this. Regardless of how you feel personally, beware of the naysayers. Online shopping, post-it notes, electric light bulbs, telephones, airplanes and televisions were initially doubted by “experts.”  We all know how each of those stories turned out.

Are you using the Apple Watch yet? Share your comments below.

Get to Know Bellefield

Bellefield is a leading innovator in Legal Mobile Technologies and Enterprise Solutions, bridging the gap between your enterprise software, mobile devices, and desktop applications.

Why Apps with “Offline Mode” Are Ticking Time Bombs

Mobile Security: Top 8 Scenarios You Should be Worried About

Going Beyond the App